Country artist Ray Scott: 'If I can quit, you can too'

When country singer Ray Scott launches into “Put Down the Bottle,” the second track off of last year’s record “Guitar For Sale,” he sings from experience.

“Sitting here trying to remember one morning / didn't wake up just to hate myself / bloodshot eyes, head just-a pounding / more or less really just feeling like hell,” he croons somewhere between the whiskey-scarred growl of the morning after and the desperate pleading of a man clawing his way out of a self-created hell.

It’s a driving song that fits perfectly within Scott’s wheelhouse, that comfort zone with one foot in Nashville’s mainstream and one foot in the independent realm where he’s doing everything himself. It’s also lifted from real life, going back to a time almost two years ago when he should have rightly been killed in a wreck on a Nashville interstate.

“The car was torn all to pieces, and if it hadn’t been for the airbag, I probably would have been a goner,” Scott told The Ties That Bind Us recently. “It was a head-on thing, so it was a big, big deal. You couldn’t even recognize the car I was driving, so I was lucky in that respect. I told my wife as we were going home, ‘Alright, this is it. I’m done.’ That was in December 2016, and I’ve been sober ever since.”

From Carolina to California Unlike many of his peers, Scott didn’t ride the elevator all the way down to the gutter. He recognized the perilous descent and hit the stop button, getting off before it got to the bottom, and today, being sober is a personal choice, he said. He’s a country singer, so he still has plenty of drinking songs, and he still plays for rowdy crowds who find his impressive baritone a perfect soundtrack to Friday night hell-raising and last-call slow-dancing.

“Honestly, I’m not condemning anybody out there; I still go and play for plenty of people getting drunk all the time, and that’s great if you can control yourself,” he said. “If you work all week long and go out on Friday night to catch a buzz, that’s great. Just don’t drive. I did something really stupid, and it was drinking that made me do it. I didn’t consider myself an alcoholic, necessarily, but it interfered with my life enough to do that, and stopping was one thing I believed I could control.”

Besides, he added, it’s hard enough to make it as an independent artist in Nashville without battling the bottle at the same time. Singing came naturally to Scott, who picked up harmony from his dad, who also sang; When his grandmother took him to California when he was 14, he saw just how big the rest of the world was, and he became determined to experience it all.

“At the time, I had never really been outside the state of North Carolina, except maybe to Virginia, and that’s when I decided I wanted to get away from there,” he said.

He wrote poetry as a hobby, and it wasn’t a leap to transition to songwriting. After high school, he hit the West Coast temporarily before heading back to North Carolina and putting together his first band. It didn’t work out, mostly because the boys with whom he played had job and family commitments, but Scott was hungry for something more, so he picked up and left for Atlanta. He earned a degree in music business, moved briefly back to Raleigh, N.C., and then hit the road for Nashville, determined to break into country.

That was in the mid-1990s, and business was booming. A new crop of young artists was transforming the landscape, and labels and publishers were hungry for songs to pitch to them. Scott managed to parlay that into some songwriting success, co-writing Clay Walker’s 2003 hit “A Few Questions” and Randy Travis’ “Pray for the Fish.” He also landed his own deal, releasing his debut record “My Kind of Music” in 2005 on Warner Bros. Nashville, but it wasn’t a smooth fit, he said.

“I came in the mid-90s, when things were booming, but what I do is a little hybrid of that, because it’s a throwback to the ’70s, too,” he said. “I got a major label deal after being in town for nine years, and I had a hit (the title track, which cracked the Top 40 of the Billboard Hot Country Songs chart), but what I was doing from a stylistic side of things was a little bit polarizing compared to what radio was doing.

“Then I got into a disagreement here and there with the A&R folks at the label about what I should and shouldn’t be doing, and that deal ended up going south.”

It last just long enough to establish a fanbase, however, and Scott walked away encouraged by those who urged him to keep writing songs and making records. It’s an up-at-dawn grind to make it as an independent artist, but in the past decade, the success of artists outside the industry’s mainstream — Simpson, Stapleton, Isbell, Jinks — has cracked open doors that have allowed guys like Scott to slip through.

“It’s tough still to make it in any kind of big way unless you have some sort of capital, but a major label deal is no longer the end-all, be-all of whether somebody’s going to get popular,” he said. “You do reach these low points — a lull here and there, where you go a few months without writing a good song — but I just keep the faith, because I know there are people out there who enjoy what I’m doing, and somehow with the help of a small team around me, I’ve stayed alive and healthy enough to make a living.” He’s got a new EP coming out early next year, and “Honky Tonk Heart” is the first batch of songs written from a specific period — the time since the release of “Guitar for Sale.” Sobriety, he added, has been a blessing in many ways to his craft.

“I feel like I’m a better singer now; I’m a better performer, and I’m more in-the-moment,” he said. “There have been a lot of really great, positive side effects of stopping drinking.”

He was never the sort of drinker to get falling-down drunk on stage or disappear on five-day benders, but that’s not the point of sobriety. The amount of the liquor doesn’t matter nearly as much as its ability to make one’s life unmanageable, and Scott realized that when he woke up in the hospital at 5 a.m. the morning after that crash, he said.

“I was out in Bellevue, working on ‘Guitar for Sale,’ and I live in Hendersonville, on the lake, about 50 minutes away,” he said. “I was heading home and stopped downtown to wait out the traffic a little bit because it was rush hour, and I ran into a couple of singer buddies of mine and sat down to watch the Redskins game. I got in my car like an idiot and tried to get home, and that’s when I had the wreck.

“I woke up in the hospital, and they took me from there to jail. Meanwhile, my wife had been out all night long and had no idea where I was, because my phone had been thrown out of my car and was just gone. When I got to the police station and finally got my phone call, I called her, and she came and picked me up. It was a pretty rough moment, because even though there were no broken bones, my face was all bloody and busted up from the airbag smashing my face.”

From that point forward, he hasn’t touched another drop. And while he’s not out there waving his sobriety flag, he’s found that his decision has affected others, he said.

“I’ve had folks reach out and say, ‘That’s great! If you can do it, I think I can do it,’” he said. “I had one former Marine who told me that ‘Ain’t Always Thirsty’ (off his 2014 self-titled record) saved his life, because he realized he had a real problem, and he was able to go and seek help because of it. I don’t get all preachy about it, but I think it’s helped me maybe minister to some people.”

If there’s a central message to Scott’s story, it’s encapsulated in the first song on “Guitar for Sale,” he added. It’s called “Living This Way,” and it documents a time in his life when he was going through a divorce, six or seven years ago, and his life began to spiral out of control. He got on top of it, that time, and ever since that near-fatal wreck, he’s been determined to stay there.

“The way I introduce it is, this song is about me at this time in my life,” he said. “I want people to hear it, because if there’s anybody out there struggling with addiction or anything that’s got you by the cajones right now, realize that if I can quit, you can, too. It’s important for people to know that I’m not the guy in that song anymore.” 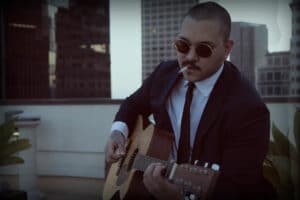 Sobriety gives producer, musician Stefan T a high no drug could ever touch 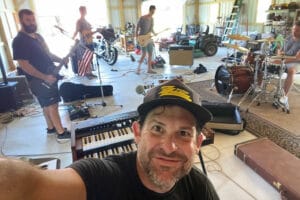 By Steve Wildsmith
Posted in Country musicians in recovery, The Ties That Bind Us and tagged Ray Scott